Faith Ringgold, at 91, remains a marvel of clear language and luminous artistry. As an activist, writer and educator, she has worked across media, producing work that is always political but also deeply and resonantly personal, buzzing with her unique sensibility. Ringgold’s place feels so solid in the artistic landscape that it’s hard to remember just how little known she was, and for how long. Born in 1930, she had her first major shows in the 1980s.

Now the New Museum in New York has brought together the wonders of a lifetime in a massive retrospective that spans three floors and covers every aspect of her career, from her engaging, angry early paintings, to her first experiments with fabrics, to the story quilts Series. These richly narrative works, architectural-scale graphic novels, fuse vernacular techniques and sublime style. They are radiant and stirring, seductive and uplifting, like stained glass in a cathedral window.

I asked a guard where to start, and he wisely suggested that I go backwards in her career, starting at the top and working my way to the early 1960s. When I got to those first sizzling paintings, I knew she would eventually find a hard-won boost. Experiencing the peace before battle is not confusing; it comforts.

Ringgold often looked back and stitched together innovations from the fragments of her past, so her mature works recapitulate the early chapters of her imaginative life. The French Collection (1990-97) tells the story of Willa Marie Simone, a fictional hybrid of the artist and her mother. The 12 mural-sized tapestries combine painting, sewing and handwritten text to create a decorative epic. Dark truths lie scattered beneath the spray of whims.

We first meet the character as a 16-year-old black girl visiting France, where she soon marries a wealthy white American. He stays here just long enough to father two children, then conveniently dies, leaving his young widow a fortune. Liberation! Willa Marie sends her children home to an aunt and plunges into the artistic whirlwind of Paris.

History willingly compresses the decades so that it can reap the fruits of multiple periods at once. She is invited to Gertrude Stein’s home; mingles with Gauguin, Van Gogh and Seurat in a Parisian café; welcomes African-American artists Romare Bearden, Jacob Lawrence and Elizabeth Catlett to the table of avant-garde bigwigs.

But the most avid invader here is the artist herself, dropping in from another time to rewrite history to her liking. In Picnic at Giverny, her version of Manet’s Le Déjeuner sur l’herbe, Ringgold’s alter ego paints the scene: a pale, scrawny Picasso posing nude for a conclave of happy, fully clothed women. Ringgold reminds us that we see her work, not hers; the masters were degraded to spectators in their creative act.

Like her protagonist, she visited France with her mother and two daughters in 1961, a moment of great uncertainty. As an art teacher in a New York City public school and with a master’s degree in art from the City College of New York, a life in art beckoned, but she had to navigate her way through endless obstacles. More than 35 years later, she has finally banished those fears: “The French Collection” is a middle-aged artist’s declaration that she has found her place.

In one of the panels, “Dancing at the Louvre,” Willa Marie and her daughters cavort through the galleries, claiming these strange halls for their own sheer delight. This persistent, determined fraud permeates the text in the margins. “Shall I paint some of the great and tragic problems of our world?” she asks rhetorically in “Picnic at Giverny”, before giving a ringing answer: “Not! I want to paint something that inspires – liberates. I want to do some of this WOMEN’S ART. Great!”

The real version of that time was more difficult. After returning from her first trip to Europe, Ringgold turned her dining room into her studio and tried to make art her top priority. Like Willa Marie, she was single; Unlike her, she was still responsible for her children, who refused to disappear into someone else’s household. Motherhood “kept me from being an artist until 1964,” she later said.

This frustration was both political and personal. The years of waiting coincided with the escalation of the civil rights movement, fueling each other’s creativity and anger. When she first began painting, she focused on white liberals in northern cities whose tolerant facades hide stirring racism. Her main target, however, was sexism. In a catalog interview with co-curator Massimiliano Gioni, Ringgold recalled how lonely that time was for black women who were simply left out of the scene.

“The men had their friendships and their loves, but we just didn’t. It was impossible for us,” she says. “I’ve seen a lot of black male artists who were happy just painting white women and enjoying that freedom instead of talking about the struggle.”

Those were bad times. In The Flag is Bleeding (1967), a small white woman clasps her arms with two men, one white and one black. The American flag stretches out in front of the trio like a theater cloth, its stripes dissolving into red streaks. When Ringgold returned to the same image in 1997, she replaced the characters with a black woman and two young children. This is no longer a desperate cry for racial reconciliation, but a refusal to go – an insistence that she belongs, even in a nation that refuses to heal its wounds or scrub away its stains.

In the years between breakthrough and retrospect, Ringgold delved into children’s books, textile work, acrylics on canvas, portraiture and embroidery, eventually finding her perfect medium: the painted quilt. Echoes of Harlem (1980), a collaboration with her mother, heralded the new genre. Faces – 30 of them, dark-skinned and fair, in profile and frontal, young and old, right side up and upside down – are arranged in a grid like a sheet of stamps, each framed by a patchwork cotton prints. The work still looks vaguely traditional and home-spun, like laying something on the bed.

Ringgold loved the way she sewed a quilt together from old scraps and time, recreating a parsimonious ritual that was both communal and expressive. “You can make them out of rags, you can use old clothes . . . You can do a social event; the slaves did it,” she said in 1994. 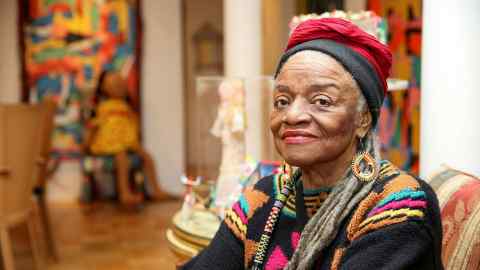 The series The bitter nest tells a family saga in a series of vivid scenes, and the panel entitled The Harlem Renaissance Party (1988) features a grey-haired woman in a fabulously colorful dress. She is the avatar of an entire matrilineal order, simultaneously embarrassing and inspiring in her offbeat, irrepressible joy. Just as Ringgold wished her mother would “settle down and be natural,” her daughters once asked her to. “She never would,” says Ringgold. “And I never will.”