Exterior view of the museum

When filmmaker and playwright Kwaw Ansah started thinking about creating a museum, he was flooded with all sorts of concepts.

Should he, in the name of the culture, pack relics that can be sold like any other commodity? Should he focus on attracting just a certain type of clientele, or should he settle for a high global standard that effectively expresses his passion for the cultural heritage of Africa and its diaspora?

The man who overcame many obstacles to assert his rightful place in the world of creativity was inundated with more and more “shoulds” and found himself drawn towards the immense pride and enthusiasm he had for the arts, culture and history the black feels people. He decided to start a museum that would be a reliable center for cultural orientation and learning that would be meaningful to local and foreign visitors alike.

This is how the Bisa Aberwa Museum came into being near the Effia Nkwanta Regional Hospital in Sekondi in the Western Region.

Officially inaugurated on July 28, 2019, the museum prides itself on being a place that showcases the achievements of our outstanding practitioners in fields such as fine arts, crafts, literature, performing arts, film, music, sports, medicine, science… and more recognizes and celebrates more. 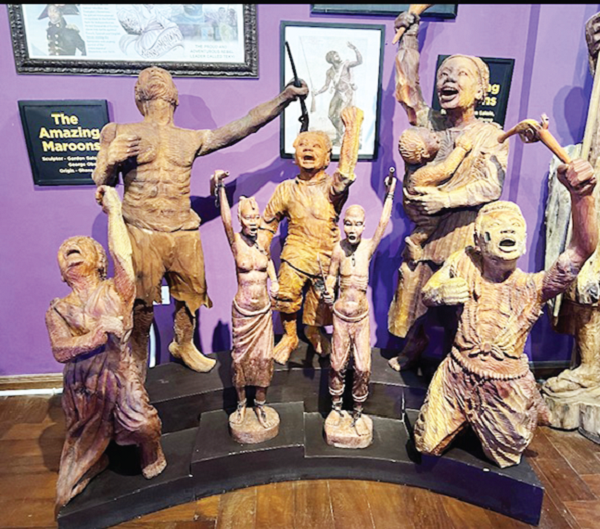 Museums are often mistaken in many places as stuffy, boring places full of relics from the past. It is this kind of perception that Bisa Aberwa has been trying to break away from. As such, its three floors and outdoor spaces are filled with the living legacy of past and present achievers, a legacy the museum’s founder sees as important in developing national and continental pride.

The large amount of statues and busts are made of materials such as stone, clay, wood and cement. Some of this was made by expert Ghanaians such as Howard Ebo Awuah, Sulleyman Bambara, Kwame Akoto Bamfo, Gordon Galolo and Kofi Dwenfour, all handpicked and with significant creative input from Kwaw Ansah.

Photographs and accompanying notes, as well as paintings by prominent Ghanaian artists, and artifacts collected in places such as Cuba, Burkina Faso, Benin and Ethiopia provide clear evidence of achievements in diverse areas of human endeavour.

“We have a priceless legacy, any way you look at it. I felt there should be a place where adults are reminded of this fact and the kids ask questions and get updates on how far we’ve come. Africans and people of African descent have contributed a lot to this world, but history has tried to distort that fact,” said Kwaw Ansah.

What is particularly striking about the Bisa Aberwa Museum is the depiction of the important role of women in our society. Bisa Aberwa in Fante means “Ask the old lady”. Throughout the museum, women are portrayed as bold, ambitious, intelligent and capable of realizing their dreams. The venue was officially opened by Ms. Rebecca Akufo-Addo.

Kwaw Ansah firmly believes that our women are the keepers of history, customs and culture; They are the ones who pass on language and tradition from generation to generation and it is important that they are recognized and empowered to continue their good work.

“We at Bisa Aberwa are not gender blind. We believe that our history must be presented in its entirety because we share a common heritage that includes both men and women.

The idea of ​​inspiring young girls underscores how the museum is already interacting with children to help them better understand our history. It has established links with the education authorities in its field of activity and schools conduct organized visits.

According to Ms. Araba Ghansah, head of museum tours, some children come as part of school packages and are given useful insight into the cultural significance of the items in the museum. Some of them are so excited about the experience that they come back later with their parents to also learn more about the achievements of black people over the years.

Bisa Aberwa not only offers space for the exhibition of statues, busts, paintings, photographs and artefacts. There is always an interplay between the visual and the aural as visitors can hear bits of sound relevant to the exhibits they are encountering. So there is a certain difference to the silent displays that exist in many museums elsewhere.

Philosopher, cultural theorist, and novelist Kwame Anthony Appiah is often quoted as saying that “it’s not the past that matters, it’s how we tell it.” The Bisa Aberwa Museum aims to be a trusted home of art and history for Ghana, Africa and the African diaspora.